For one precious day, thousands of teachers from all over the country were able to let go of their lesson plans and a myriad tasks last weekend to relish the joys of being appreciated. 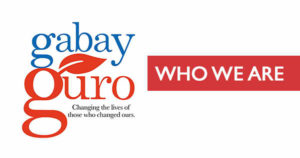 They were feted at the 10th anniversary of the Gabay Guro celebration at the SM MOA Arena.

The celebration was part of the weeks-long observance of Teacher’s Month, and joining the teachers was no less than the Department of Education Secretary, Leonor M. Briones, herself a respected professor and tutor to many of the country’s best public servants.

Laughter and cheers punctuated the air at the SM MOA Arena, and food and gifts were in abundance for the teachers, who were also serenaded by some of their favorite stars. The event was a project of the PLDT Smart Foundation.

No less than the head of the MVP Group led the tribute to the teachers. PLDT chair Manny V. Pangilinan said of the day, “It is really to honor the teachers who deserve to be honored. One day in a year, para handog namin sa kanila [our offering to them] . . . giving thanks to them.”

It is also the time, he added, “for us to raffle off prizes.” Up for grabs by lucky winners were: two houses, two vans, tricycles for the major prizes. Gadgets and cash prizes were also given away.

An obviously pleased Pangilinan said, “we should do this every year. We might start in a regional event back to back.” 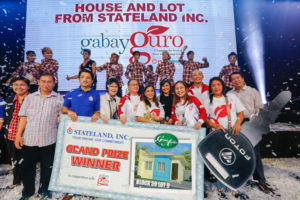 Among the stars at the free concert were: Southborder, The Company, Lea Salonga and Pops Fernandez. Also gracing the event was 2015 Miss Universe Pia Wurtzbach.

“We’re celebrating our 10th year nationwide. We want to show gratefulness for everything he has done for us,”said Chaye Cabal Revilla, chairperson of the Gabay Guro Foundation-PLDT.

Among the teachers who joined the celebration despite her eyesight problems is Teacher Cristina Mediana.

She explained what keeps her going: “Yun kasi ang calling ko, kaya nagtuturo pa rin; before kasi na-discourage na baka hindi na makakita. Tuloy pa din yun ang mission [It’s my calling, so I go on teaching. I used to be discouraged and fretted about no longer being able to see. But the mission continues].”

Norma Briones, who has taught for over three decades, said “teaching keeps one young,” even though students can be difficult at times. “this is a good occasion; teachers can come together in fellowship.”

DepEd Secretary Briones said, “it is a great day [because] for the entire year teachers work very, very hard. [Here they are] recognized and rewarded, and they are entertained and they deserve it.”

Meanwhile, some freebies were given to teachers from the Manila International Book Fair at the nearby SMX convention center.

Are you agree with this? If yes please share this article.

Thank you so much for readers.